The reasons I teach…Marie Biswell

Imagine being told daily how useless you are and how you shouldn’t be where you are now and how even if you go to the people that are supposed to believe you, they don’t or tell you that you’re exaggerating…… This was my reality daily going through school to the point that for two and half years I stopped talking altogether, I was not listened to when I tried to report what was happening so what was the point. I was asked to see the school wellbeing manager, checked in on daily by form tutors and other teachers and my Mum was also asked to ensure that I was always talking when in school. Unfortunately, I’m stubborn and when I set my mind to something I usually carry on. This situation suited me perfectly, I had lessons where I was more than happy to talk, like when I had GCSE exams and I needed to achieve a speaking mark, but other than that I had a group of friends who would happily answer the register and ensure that I didn’t have to talk if I didn’t want to. One night when I was revising for my GCSEs my Mum and my older brother went off on a training course at the local adult education centre to learn sign language, instantly I was interested and really wanted to know more. Unfortunately, I was too young to go with them however I could pinch my Mum’s handouts and see what I could learn. 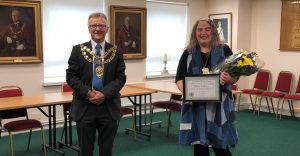 I would sit every night for a few minutes and learn how to spell my name or how to use the letters to spell other words, could I find the signs for certain things I wanted and whether I could learn songs in sign as well. I was hooked I finally had a communication that I knew well and didn’t mean that I was committing to something that saw people being cruel and unfeeling towards me and all of a sudden, I was listened to and watched for what I could do. My Mum also had this amazing dictionary that with so many signs in and it soon became my favourite book.

After leaving school I went into work with my Mum at the nursery that was a family business at the time and I started to earn money and it was enough to spend on sign language lessons and go on the same course that my Mum and brother had been on. After spending so long without talking I had anxiety issues and absolutely hated meeting new people and I was about to put myself in a situation that was only new people and learning a new skill as well, what on earth was I thinking? How would I cope with this? I arrived on the first night stupidly early and met the tutor before other people got there and even managed a full spoken conversation with him as he was hearing and that was it, I was off, I knew some of the signs we were learning and I knew how to spell pretty much anything, it was amazing! After a few weeks my confidence started to build and suddenly I was smiling, laughing, talking and even looking up from the floor when I was walking, I had most definitely found something that I knew I wanted to do for a long time to come.

Fast forward to 2021 and I have been a fully qualified BSL interpreter for the past three years and now try and stop me from talking and signing as often as I can. I have also proudly been a BSL tutor for Buckinghamshire Adult Learning since 2015 and I love every second of my job I’ve had with them to date. I’ve had the privilege of meeting a variety of different students who have all in their own way taught me something different and I have been fortunate enough to be able to pass on some of the confidence that learning sign language has given me.

In my first year of teaching I met a lady who had been through chemo treatment after discovering she had been diagnosed with brain tumours, she didn’t tell me this until the last term on the course but she wanted to tell me how grateful she was to have been given an outlet where she was able to go weekly and be accepted for just being her and not her tumour. I had another student who was also going through cancer treatment on her tongue and wanted to learn sign language for when she starts to lose her speech. She hated being treated differently and looked to me as someone that just saw the person and not the speech issues and crutches that came with her. These two have always stuck in my mind as people that I have enjoyed teaching but also what an inspiration to carry on despite what they have been through.

Throughout my teaching career with Buckinghamshire Adult Learning I have also met so many students that have unfortunately lost a parent while being on the course, the unimaginable pain they must have been going through, not one of them dropped out of the course as a result, in fact they carried on to achieve their qualification with a new drive to gain it. Each and every one of these students have gained their level one or level two qualifications was so grateful to have a space where the pain was left outside and could find their smile again and concentrate on something different. One student even signed a special song at their father’s funeral, and it was a privilege to be able to teach them the words.

As we all know we have our own relationships and life choices to go through when we are not in the classroom. At the start of my courses I always have groups of students that you can pick out, the quiet ones, the confident ones, the ones that have signed before and the ones that you just can’t place. I have quickly learned that those are the ones to watch, those are the ones that are going through something they’re not confident enough to share just yet. Over time those ones you can’t place come out of their shell and they start to stay later to help put the tables back, or to make sure I have someone to walk to the car with, anything to get five minutes more with someone who listens to them. I have been, over the years, someone to shout at, someone who listens and someone to trust, all the things I believe I was not shown when in the classroom myself at school, all the things I needed. Students have confided in me about mental health issues, relationship problems and just generally needing adult conversation. A few years ago I had a student who openly admitted that sign language and the class environment had given them the confidence to be themselves again and talk things over with their husband and as a result they didn’t get a divorce and instead went on to renew their wedding vows.

The student that I taught that stuck out most for me was the same shy and quiet person I saw in myself not so many years before I met her. She would enter the classroom quietly put her hand up in my direction and head to her chair never saying a word. Initially on meeting me she couldn’t even look me in the eye. She would laugh with the others, join in the fun but only ever by nodding or shaking her head and laughing. To ask her for the answer to a question was torture for her as she didn’t want to answer or commit to something that might be a mistake. She was such an amazing signer from the first time I saw I knew the potential. Over the year on the course her confidence grew, she could hold conversations and even on occasions put her hand up to answer questions in class!! The progress was massive and got better year after year. She has now gone on to be my regular volunteer in level one classes, works with deaf children and often takes on volunteer work for me and I wouldn’t be without her, her talent and empathy is a skill in itself and something I am constantly learning from.

I believe that through teaching BSL level one and level two I have been able to pass on confidence and that smile I have to a group of people that have not only been my students but I have also been lucky enough to call my friends in a lot of cases as well. They have grown in confidence, compassion for others and skills a lot of them have gone on further to develop. Through learning sign language I learned how important communication is to everyday life and this has been reflected in my teaching and is now being shown through the constant achievements of my students as well.