Signature are supporting the BSL Bill 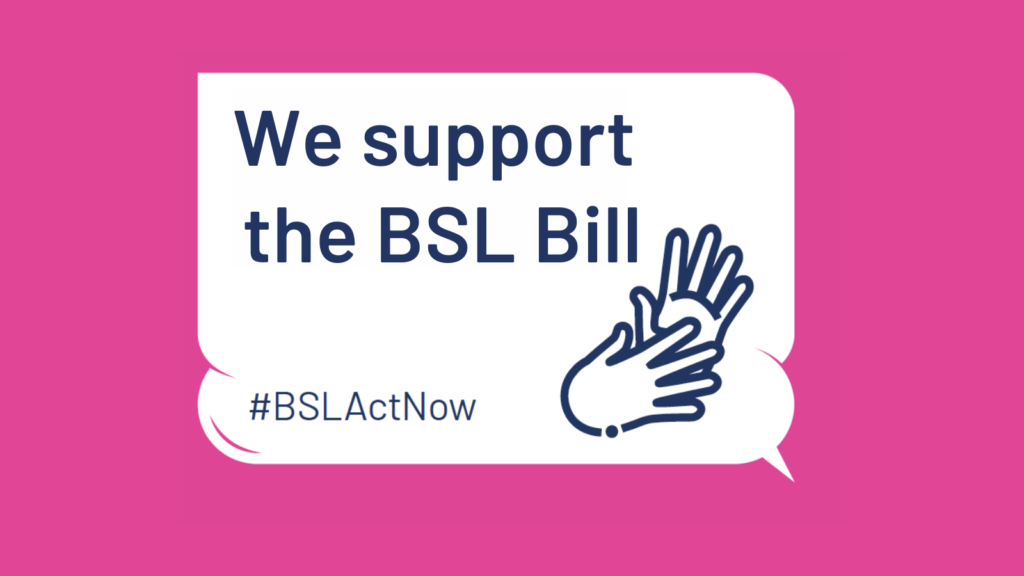 Signature is proud to be supporting the BSL Bill, led by the British Deaf Association (BDA), who is working with several other Deaf charities and organisations whose purpose is to support the Deaf community.

The group are The Royal National Institute for Deaf People (RNID), Royal Association for Deaf people (RAD), Signature, Institute of British Sign Language (iBSL), SignHealth, National Register of Communication Professionals working with Deaf and Deafblind People (NRCPD), and Black Deaf UK. These organisations represent the diversity of the Deaf community in the UK. We are united in calling for a BSL Act to achieve legal status for British Language as the primary language of the Deaf community in the United Kingdom.

Achieving legal recognition of BSL through an Act of Parliament (a BSL Bill) in the UK would be a huge step forward in terms of improving Deaf people’s quality of life, their inclusion and autonomy in British society, educational and professional opportunities, and even their health outcomes.

West Lancashire MP Rosie Cooper is looking forward to the parliamentary debate of her British Sign Language Bill which will take place on 28 January 2022.

The Bill is a simple instrument that will declare British Sign Language as an official language of the UK and provide for improved guidance to be issued by the Secretary of State to public services and government departments. The second reading of the Bill, which is the first time MPs get the chance to debate it, is 28 January, and if it passes this stage it will receive a committee stage and third reading later in the year, on the way to becoming Law.

Lindsay Foster, Executive Director at Signature said “we are really proud to be supporting this campaign. The British Deaf Association have done great work to get the campaign to where it is, bringing the sector together to get behind this campaign. We look forward to the second reading of the BSL Bill on Friday 28th January 2022 and are hopeful for a positive outcome.”

How you can help!

How many people use BSL in the UK?  How many of these users are Deaf?

About the BSL Act Now! Campaign

On 18 March 2003, the UK Government formally recognised British Sign Language as a language in its own right. It also promised to look into conferring legal status on BSL. Nearly nineteen years on, we’re still waiting.

The BSL Act Now campaign is being led by the British Deaf Association (BDA) to support the Deaf community across the UK to come together and campaign for the legal recognition of British Sign Language (BSL) and to create public policy mechanisms that will remove the countless barriers that society places in front of Deaf BSL users in their daily lives.

The BSL Act Now! campaign is supported by a number of other charities and organisations whose purpose is to support and empower the Deaf community and improve communication between Deaf and hearing people.

Deaf people in the UK in 2022 still do not have access to the same public information and services that are easily available to the hearing population. They are forced to rely on inadequate disability discrimination legislation (Equality Act 2010) to fight for access to vital information (for example, about COVID, healthcare, education and justice) in their own language – an indigenous language of the United Kingdom – British Sign Language.