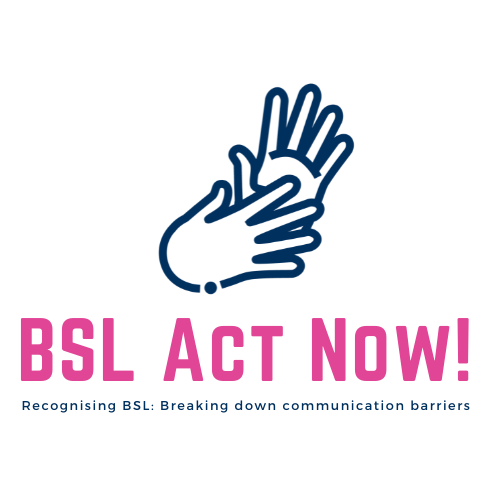 If the Bill passes into law, a BSL Act would secure the legal status and increase public awareness of BSL. Government Departments and public bodies would also be required to adhere to new guidance, setting out how they must meet the needs of the estimated 87,000 BSL users in the UK.

Should the Bill pass the second reading on 28 January, it will go through to committee stage in February and then a final (third) reading in March. If passed, a BSL Act will mark a historic milestone for Deaf people across the United Kingdom.

If BSL were to finally receive recognition and legal protection, charities and organisations supporting the BSL Act Now! campaign hope it would lead to wider change across society, giving Deaf people to full and equal access to education, employment, public services such as the NHS, opportunities to follow and participate in political debates and issues, sit on a jury, and play a greater role in their local communities.

Across the UK, we see examples every day of the challenges that Deaf people face, from Francesca Bussey – who had to tell her own father in hospital that he was dying as a qualified BSL interpreter was not provided – to Deaf schoolboy and campaigner Daniel Jilling’s – who was unable to do a GCSE in his preferred language, BSL, as it is not offered as an option in school. Even the Prime Minister’s Office failed to provide a BSL interpreter for public COVID-19 announcements, causing thousands of deaf people to miss out on vital health information which was ruled to be a breach of the Equality Act.

The British Deaf Association (BDA) launched the BSL Act Now! campaign on 18 March 2021 as part of Sign Language Week. The campaign called for Deaf people to write to their MPs, asking for them to introduce a BSL Bill should their name be drawn out of the Private Member’s Bill ballot. Nearly 90% of MPs received a letter from their Deaf constituents.

In June 2021, Rosie Cooper’s name was drawn, and she confirmed she would take forward a BSL Bill. Cooper’s parents were both Deaf and her first language was BSL.

“18 March 2003 was when the UK Government first formally recognised British Sign Language as a language in its own right. It also promised to investigate a legal status for BSL. Nineteen years on, we’re still waiting. Enough is enough! We are tired of being excluded from playing a full role in society.

“Deaf people still do not have access to the same essential information and services that are available to the hearing population. The Equality Act does not cover linguistic rights. We are forced to rely on inadequate disability discrimination legislation to access information in our own language.

“British Sign Language is an indigenous language of the UK and should be accorded the same legal protection as Welsh and Scottish Gaelic.”

“RNID and our supporters know how important it is to be part of the BSL Act Now! campaign, which we hope will secure full legal recognition for British Sign Language. BSL is the first language of 87,000 Deaf people in the UK, and this Bill represents a unique opportunity to recognise their language, history and culture, and help ensure BSL users are fully included in society.

“We’re pleased to be alongside other charities working with Deaf people in the fight to bring about this momentous change. We hope parliamentarians will support Rosie Cooper to get the Bill over the line and give Deaf people the recognition they deserve.”

In late 2021, Deaf trailblazer Rose Ayling-Ellis’ glittering success on BBC Strictly Come Dancing got British Sign Language into every newspaper, every TV channel and on radio stations across the country. It started a conversation and opened many people’s eyes to the existence of British Sign Language and the obstacles faced every day by Deaf people in the UK. Rose’s achievement showed that Deaf people can achieve anything when those obstacles are removed – for example, by providing a qualified BSL interpreter.

Rose Ayling-Ellis said in this month’s The Big Issue:

“I’m backing [the Bill] because this is my language. The fact that my country doesn’t see it that way is really sad and means we don’t get the respect we deserve, and the language deserves”.

“BSL is not an official language, legally, in this country. Which is outrageous. Because it is such a beautiful, rich language with its own structure, its own grammar, its own slang. It’s even got accents.”

We are also asking everyone to write to their MP asking them to support the second reading of the bill on Friday 28 January, share stories of the challenges they may have faced due to lack of access to public services in BSL and raise awareness by sharing photos on social media with the hashtags #BSLBill and #BSLActNow.

This Bill presents a real opportunity for change, to break down communication barriers and to give Deaf people the recognition, inclusion, and equality that they deserve.