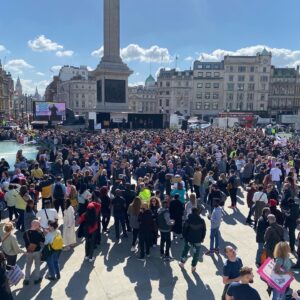 A Bill to recognise British Sign Language (BSL) as a language of England, Scotland and Wales has passed unopposed by MPs this afternoon on its third and final reading in the House of Commons.

The BSL Bill, which was brought forward by Labour MP Rosie Cooper as a Private Member’s Bill and has since gained cross-party support, will now progress to the House of Lords, where it will be introduced by Lord Holmes of Richmond on Monday 21 March.

On the same day, the British Deaf Association (BDA) held a BSL Rally in Trafalgar Square to show the Deaf community’s support for the Bill and to celebrate Sign Language Week, which runs from 14-20 March.

Thousands of Deaf and Deafblind BSL signers and their hearing friends, family members and allies attended the peaceful Rally on a glorious sunny afternoon.

High-profile speakers in attendance included Rosie Cooper MP, who grew up with Deaf parents; the Minister for Disabled People, Chloe Smith MP, who signed part of her speech in BSL; and Deaf actress and winner of Strictly Come Dancing 2021 Rose Ayling-Ellis, who read a poem by Deaf poet Raymond Antrobus.

If the Bill passes into law, a BSL Act would represent a positive step forward for the Deaf community in Britain in terms of the recognition, facilitation and wider public awareness of their language.

A BSL Act would:

(*The BSL Bill does not include provisions covering Northern Ireland, which is in the unique position of having two national sign languages – British Sign Language and Irish Sign Language – and is preparing to introduce its own BSL / ISL Bill through the NI Assembly.)

(**That number does not include hearing people who can sign, such as the family members, friends and colleagues of Deaf people, BSL interpreters, teachers of the Deaf, and so on. The British Deaf Association estimates that British Sign Language is the first or preferred language of around 151,000 people in the UK).

18 March is a significant date for the Deaf community, as it marks exactly 19 years since the UK government first formally recognised BSL as a language in its own right, distinct from spoken English.

The government at that time promised to investigate a legal status for BSL. However, that has not happened, despite two decades of campaigning from the Deaf community. As a result, Deaf people have continued to struggle to access essential, sometimes life-saving, public services and information in British Sign Language.

“The BSL Bill presents a real opportunity for change, to finally break down avoidable communication barriers and to give Deaf people and their language – BSL – the recognition, inclusion, and equality that they deserve.

“If the BSL Bill passes into law, we are ready to work hand-in-hand with the UK government to redesign public services that meet the unique needs of the 151,000 people who have British Sign Language as their first or preferred language.

“We also hope that the legal recognition of BSL will encourage many more people across the UK to learn British Sign Language and go on to become interpreters, bilingual professionals and allies of the Deaf community. BSL can bring us all together as a society.”

“We at RNID, our supporters and the wider Deaf community are delighted that the British Sign Language Bill has cleared the final stage of its passage through the House of Commons. We hope it receives the same support from peers in the House of Lords as it has from MPs and ministers.

“We welcome the mechanisms within the Bill and commitment from Government to working with a proposed advisory board of Deaf people to put the Bill into practice. Giving the Deaf community a seat at the table will mean government policies and public services will the meet the needs of Deaf people for fully inclusive and accessible services.

“We mustn’t miss the vital opportunity the Bill gives us to win legal recognition of BSL and expand Deaf people’s rights.

On behalf of the Deaf community and alongside other charities, we will continue pushing to make sure the Bill is passed into law before the end of this session of Parliament.”